It’s Not Always What You Say

A major source of communication breakdowns is incongruence between the words that people say and the nonverbal signals that they send, largely because we lose sight of the fundamental truth: You cannot not communicate. Every second that we are in the presence of another, we are constantly sending and receiving messages, often silent, nonverbal messages that can either augment our communication effectiveness or detract from it.

To further complicate matters, bosses often tell me that they didn’t “intend” for people to take a message a certain way. Others have misunderstood. However, the reality is, our intentions don’t speak as loudly as our actions do. After all, the road to high turnover is paved with good intentions.

Nonverbal communication is especially persuasive and powerful in communicating emotions. When there is a discrepancy between the words we say and the nonverbal message we display, the receiver, more often than not, will trust the authenticity of nonverbal displays of feelings more than the verbal explanation of them. Since these emotions are frequently difficult to control, they will often leak through in telltale hints about our nervousness, anger, boredom, or other feelings. We are not always aware that we are sending powerful messages that undermine the message we are trying to convey. To help understand some of the ways we sabotage our best efforts, here are some principles of nonverbal communication and its application to the workplace:

• Respect space. The use of space refers to personal space and territoriality. Personal space is the bubble that surrounds a person. Standing 18 inches or closer, in American culture, causes the other person to feel uncomfortable. Generally speaking, Americans are most comfortable when others are at least an arm’s length, 3-4 feet away. However, this is not universal. In many other cultures, standing that far away can result in the other feeling snubbed. Territoriality refers to our “turf.” At work, this would be an office, a desk, a computer, etc. We don’t want others using our things, even though they are really the company’s things. Before coming into our offices, we might want people to knock on the door frame, even when the door is open. Violating personal space or territoriality will often trigger a defensive reaction. Click To Tweet

• Exude confidence. Action language includes motions, gestures, and posture. One of the things I coach executives about is carrying themselves in such a way that they communicate poise. Looking self-assured will cause others to believe that you are, even if you aren’t. Standing or sitting tall with shoulders back communicates an air of authority. One tip I give clients is to avoid the temptation to put your hands in your lap when you are seated because doing so encourages the shoulders to slump forward. Tapping, nodding, and swaying are nervous habits that can detract from your professional image. Above all else, avoid pointing. This is the single most defense building, intimidating gesture that a boss can use.

• Shake hands with style. The handshake, the first and probably most important, if not only, acceptable form of touch in the workplace, is extremely important because people assign so much weight to its merits. Men seem to know how to shake hands with one another, but often women don’t practice shaking hands at all, and men don’t know how to shake the hand of a woman. All the same rules apply. A handshake should be firm, not crushing. The entire hand should be involved, not just the fingertips, and both men and women need to avoid the temptation to turn the wrist of the other person, thereby putting your own hand on top of the other. This is usually seen as an act of aggression and is likely to start things on a negative note. With rare exceptions, other forms of touch in the workplace should be avoided. For the most part, neither sex appreciates the two-handed handshake or the handshake that involves touching the other’s shoulder or arm.

• Look them in the eye and mean it. Eye contact denotes both friendliness and aggression. Eye contact seems to occur when people seek feedback or reactions from others or when they want to signal that they want to communicate. It encourages interaction by signaling that the communication channels are open and that the receiver is ready to listen. In American culture, looking someone in the eye communicates honesty, warmth, and good will; lack of eye contact will often make people suspicious. People frequently interpret the absence of eye contact to be an indicator of disinterest, apathy, rudeness, or deceit. However, a gaze that lasts longer than ten seconds is usually seen as hostile or flirtatious.

• Present a professional image. Physical presentation includes the objects we display that intentionally or unintentionally send messages about us. This, more than any other area of nonverbal communication, has received a great deal of attention. Books like John T. Molloy’s Dress For Success gave us data upon which to base our decisions about professional dress and presentation.

• Speak well. Paralanguage refers to how we speak, the non-verbal elements of the human voice. It includes all that accompanies language and consists of all the vocal cues that individuals use to communicate: pitch, rate, inflection, volume, quality, enunciation, flatness, and fullness. Awareness of paralanguage can help the sender show more interest and enthusiasm when words are presented in a more animated fashion. If your business calls for you to communicate via teleconferencing or phone calls, paralanguage will be extremely important for you since it will be the only form of nonverbal communication your receiver will have. To improve in this area, tape record yourself. Is your rate too fast? Voice loud enough?

• Create an environment for communicating. Environment refers to all the factors in the environment that influence the communication climate: temperature, seating arrangement, elevation differences, and color. Often appropriateness is culturally determined, but there are some general truths. People who are trying to communicate as equals should both have the same elevation. In other words, both should be seated or both standing. Barriers, like podiums and tables, between people create distance. King Arthur had the right idea about creating equality when he had the knights sit at a round table so that no one would be in any better position than anyone else.

• Respect others’ time. The use of time also varies from culture to culture. In America, being “on time” means participants are in place a few minutes early. Being “late” is anything after that. As I mentioned earlier, the boss who continuously shows up late to meetings with her direct reports sends a loud message that they are not important to her, no matter what her words might indicate to the contrary. People with status and power can show up late and get away with it in the short run. However, in the long run, not respecting the time of others can cost you in loss of trust and rapport.

• Understand differences. Another principle of nonverbal communication that further compromises effective communication is that it is culturally learned and is dictated by cultural norms. Certainly, any time we visit another country, we do well to learn their nonverbal language, even if we cannot master their verbal language. However, cultural norms exist within our borders too. For instance, there are significant differences between the way men and women communicate via nonverbal communication. Women tend to smile more than men do, often when they are not happy. Similarly, women tend to nod when they are listening. Often another woman will decode this to mean that she is following the conversation, which is probably accurate. But most men will think she is agreeing with them since they usually don’t nod unless they agree. Smiling and nodding are habits that most women have trouble breaking; therefore, when I coach a female nodder or smiler, I encourage her to make sure she using clear, concrete language to communicate her real perceptions.

• Be aware of vocal inflection. A trend for both men and women that has recently been sweeping the nation is “upspeak.” This is an inflection in the voice that makes the speaker sound as though she is asking a question when she’s actually making a statement. It’s usually an attempt to elicit from the receiver some recognition of understanding. For example, she might say, “So, I called Tim? The VP of operations? To see if they had fixed the supply chain problems? And he said he would call me back before ten.” The questions seem to ask, “Do you understand?” “Are you following me?” But they also communicate uncertainty and a desire for approval. Both undermine the sender’s position of strength. 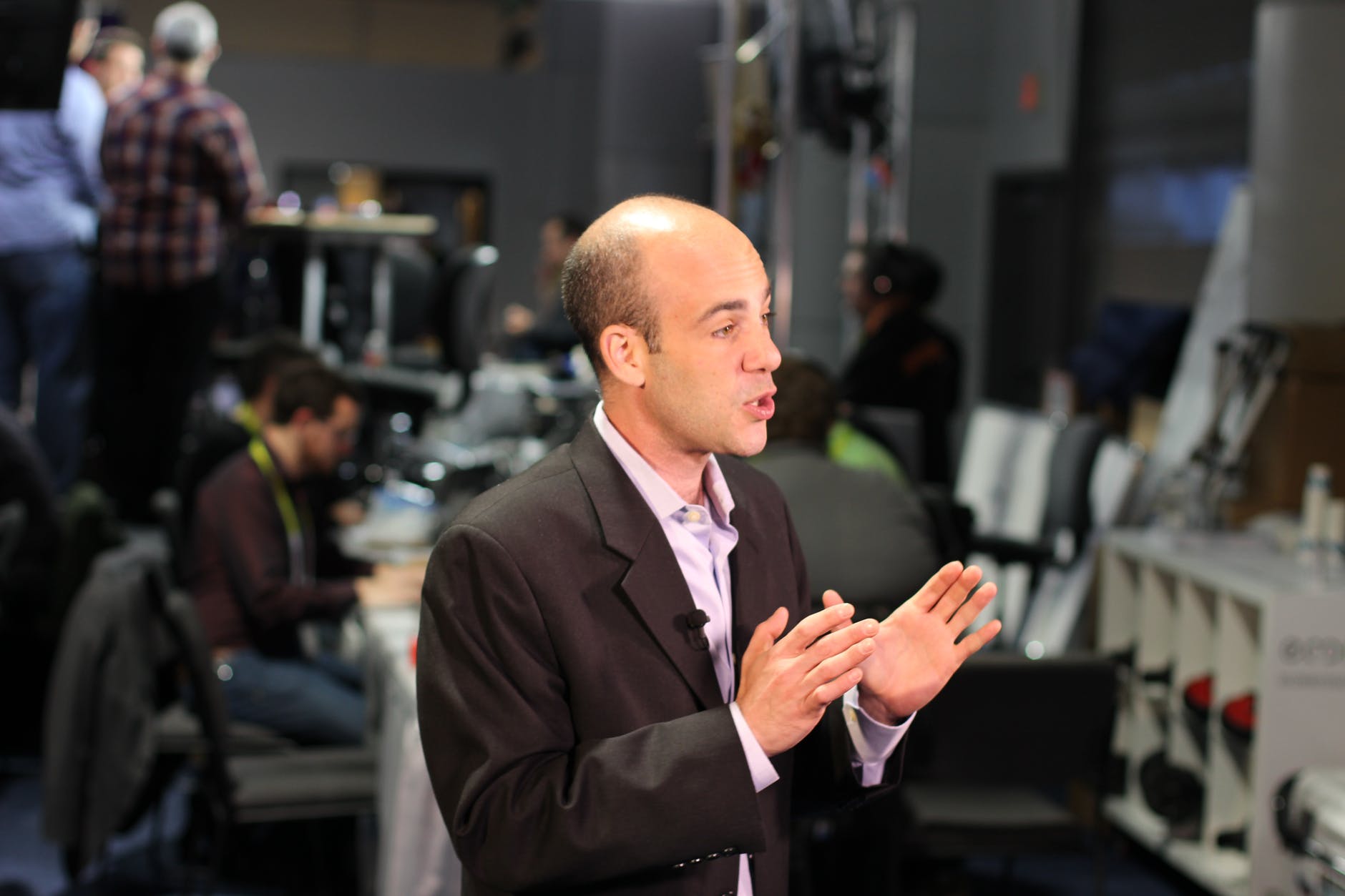 Effective communication is at the heart of all human activity, so bosses who excel in it take great strides in developing their people and keeping the stars in the organization. In the workplace, the purpose of communication, even non-word communication, is to enhance performance and produce better outcomes—that’s how its effectiveness is measured. But that isn’t so easy; there are numerous opportunities to sabotage your best intention. You need tools to help you develop, sustain, and produce high levels of innovation and creativity. Effective nonverbal communication is one of those tools. Click To Tweet