As my clients emerged from the global economic turmoil that began in 2008, they indicated they had learned numerous lessons—the most important one: When leaders make good decisions, little else matters. When they refuse to make decisions or show a pattern of making bad decisions, nothing else matters. As I helped these leaders position themselves for the new economy, I began to see what others didn’t see. Something was standing in their way—usually the unwillingness or inability to demand cohesion and teamwork. In many cases, they thought they needed more—more education, more experience, more time, or more data. They didn’t realize they had enough of these, but they did lack the confidence, courage, and optimism to disrupt.

As we begin 2022, we face many of the same challenges we had after the 2008 downturn, but the global pandemic has complicated the problems we’ve always had and introduced some new ones we never suspected we’d face. The lessons from 2008 are now on steroids. Successful leaders understand they can’t push growth. Instead, they had to remove barriers to success—usually barriers of their own making. They need to understand how to remove their silo-building behaviors and replace them with silo-busting decisions.


Successful leaders understand they can’t push growth. Instead, they had to remove barriers to success—usually barriers of their own making. Click To Tweet

Research offers overwhelming evidence that groups of extremely bright and talented individuals often appreciably underperform when compared to groups comprised of average or above-average talent. Yet, many clients hire me to make sure they avoid hiring average performers. Too often these same think they’ve done their jobs by collecting the individual virtuosos. Then they retreat to a safe distance to watch the innovative fireworks. Frequently, however, instead of engendering “ooh’s and ahh’s,” the group—which never formed into a team—causes a hugely expensive dud. Even while in the same room, they remain in their silos.

Culture of a Virtuoso Team

Building a team of exceptional people involves appreciating how individual members’ characteristics and personalities unite to form the unique culture of a virtuoso team. Satisfaction, performance, productivity, effectiveness, and turnover depend, to a large degree, on the socio-emotional make-up of the team. But one thing remains constant: Stars commonly think they lose their ability to shine when in a galaxy—their distinctive quality diminishing as others shine beside them. Consistently teams underperform despite all the extra resources—problems with coordination, motivation, and fear of losing control chipping away at the benefits of collaboration.

Shape and Build the Team

Leaders who aspire to assemble a team of top performers face daunting obstacles if they don’t shape and build the team at the onset. Without structure, a team of stars will flounder unproductively, often concluding that the team’s efforts are a waste of time, at which time the team founders. Conversely, when leaders define expectations, impose constraints, and help members clarify norms, roles, and responsibilities, the team can spend its time carrying out the task.

Leaders find themselves most motivated to spend on silo-busting when the team faces a roadblock, but often that will be too late. A more proactive approach would be to do the building of the team when it’s forming or when things are going well. When leaders disrupt a collection of egos and insist on collaboration, they create a galaxy of stars—a team of virtuosos. 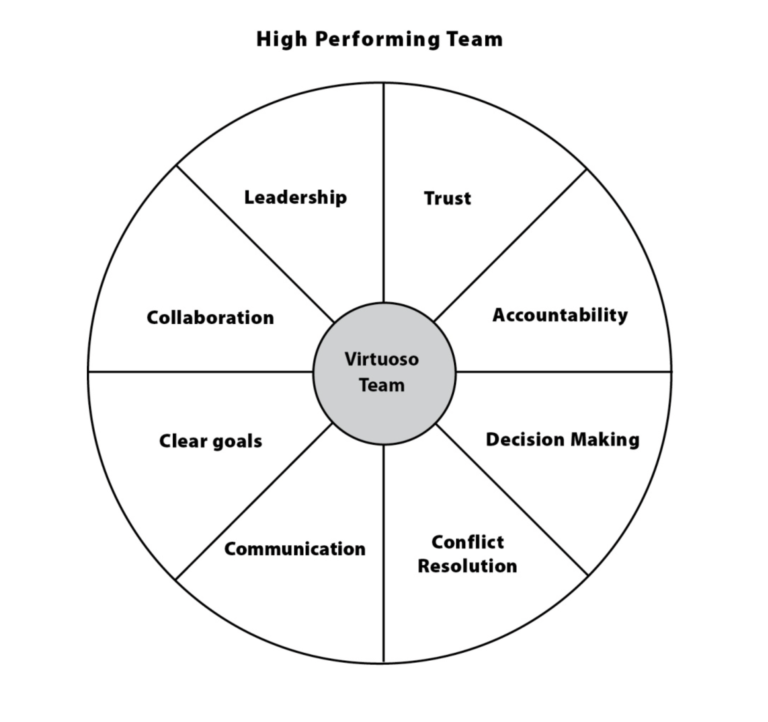 No two teams, not even two teams of stars, look alike. However, when they understand the universal dynamics that contribute to successful interactions among exceptional people, leaders can adapt and adjust their communication to the situation and make choices that will benefit the team and the organization. It all starts with trust.

Sink or Swim – You’d Better Be a Good Swimmer

The willingness to be vulnerable—to link one’s own success to another’s—begins with the fundamental belief that members care about each other. They don’t necessarily feel protected or nurtured, but they don’t fear they will be sacrificed on the corporate altar if things go awry either. Virtuosos repeat an internal mantra: “If I sink or swim as a result of your efforts, you’d better be a good swimmer yourself and someone who will throw me a lifeline if I need it.” When that caliber and quantity of trust pervade the team’s interactions, accountability follows.

“If I sink or swim as a result of your efforts, you’d better be a good swimmer yourself and someone who will throw me a lifeline if I need it.” Click To Tweet

Problems surface when members haven’t established clear lines of responsibility, don’t communicate, and haven’t clarified publicly what each person needs to do. Ambiguity reigns and establishes itself as the enemy of accountability, which compromises commitment. This lack of understanding creates barriers among team members that significantly impede efficient and effective teamwork. Successful teams keep the spotlight on the decisions the team makes, not just on tasks accomplished. Improved communication, whether it takes place to resolve a conflict, foster trust, or convey respect is key to construction disruption, but we don’t always communicate effectively in the best of times, so what are the chances we will in high-stakes situations?

When tackling a major initiative, effective leaders realize they need to assemble a diverse team of phenomenally successful individuals—and then force them to work together. A team composed of dissimilar, highly educated specialists often holds the keys to the success of the challenging initiatives. Paradoxically, the qualities required for success are the same ones that will undermine success. Complicated projects demand different skills, but we tend to trust most those who share the most in common with us. Similarly, complex endeavors require highly skilled participants, but they tend to fight with one another, as we learned from the team that discovered insulin. When success hinges on cohesive efforts, leaders need to uncover ways for specialists to work together, under high pressure, in a “no retake” environment.

Strengthening an organization’s capacity for collaboration requires a combination of long-term investments—in building relationships and trust and in developing a culture in which leaders model cooperation. It won’t happen automatically, but through careful attention to the eight functions of a virtuoso team and the eight things that build collaboration, leaders can solve complex business problems without inducing the destructive behaviors that can accompany the collaborative efforts of stars.

Creating a galaxy begins with a constellation of stars—people whose performance distinguishes them from the ordinary and whose gravitational pull allows the organization to serve as a magnet to other stars in the solar system. It all starts with the individual but quickly becomes more about the stars orbiting one another in a way that builds cohesive, collaborative efforts.